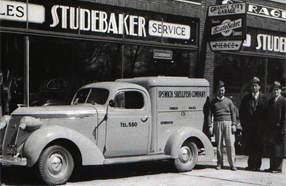 A quest to meet the growing demands of area restaurants for fresh local seafood. George Pappas, with several clam diggers working for him and Joe Sikora, a natural salesman, combined talents and started a business that today is one of the leading seafood processing and distributing companies across the country; Ipswich Shellfish Company, Inc. After six years, and a flourishing start to the business, Joe Sikora left to pursue other ventures.

From the very start, Ipswich Shellfish company has been a leader in the seafood industry, George Pappas made extraordinary efforts to provide his customers with exactly what they wanted…quality seafood at a competitive price; delivered quickly and freshly.

Right in the heart of Ipswich the modern processing plant soon housed 70 clam shuckers working on the daily catch of 75 clam diggers. The seafood was delivered in what was unusual and innovative at the time-refrigerated trucks. Two trucks made the daily route delivering ocean-fresh clams, lobsters, scallops and oysters. Pappas enjoyed a well-earned loyal customer base. Some of his original customers are still with the company today. He fostered friendships with reliable suppliers – local clam diggers, fishermen and lobstermen. Because he relied on the others to supply him with the core of his business, Pappas knew first-hand how important his dependability was to his customers.

1949: MAINE SHELLFISH COMPANY
To supply far-reaching customers with fresh seafood, and to keep up with the growing demand, a new plant was opened in Ellsworth, Maine. The new plant distributed famous Maine Lobsters and other seafood to Northern New England.

1960: UNITED SHELLFISH COMPANY
Ever expanding Ipswich opened a third plant in Grasonville, Maryland. Deep in the Chesapeake Bay, precious shellfish – clams, oysters, crabs – were harvested and brought to an expanded number of customers.

2005: MAINE SHELLFISH COMPANY, KENNEBUNK
To meet the explosion of demand in southern Maine and to assure premium service a new processing and distribution facility was opened in Kennebunk, Maine.

2008: LOWCOUNTRY SHELLFISH
The coastal area of South Carolina (which is generally referred to as Lowcountry) is a area rich in both history and seafood resources. The management team and staff at this Charleston location bring years of experience in the local and international seafood markets.

The credo “satisfy your customer” is in large part responsible for the tremendous success and growth of each of the Ipswich Shellfish companies. A small “shellfish house” offering local clams to 150 customers has expanded into a seafood empire offering 3000 different items catering to 6,000 current, satisfied customers. In the last year almost 30 million pounds of seafood were processed by the Ipswich Shellfish companies. – compared to 300,000 pounds in 1935.

In a business that’s reliant on Nature, the Ipswich Shellfish companies have consistently triumphed for the customer. And, one thing remains the same; Ipswich Shellfish has and continues to provide the finest, freshest seafood then and now.